Researching granddad’s regiment had two positive outcomes. One was correcting an error on Harry Marsh’s grave in Medjez-el-Bab War Cemetery and the second, via the help of the members of ww2talk.com, was putting Freddie Friend in touch with Harry Marsh’s family. I will cover that story in another blog post.

Gunner Henry “Harry” Marsh, 4126455, was killed on the 24th April 1943 during a German air attack on the Bou Arada road. The war diary states that Gunner Marsh was killed by an AA shell. The fragmentation of the shell(s) amongst the rocks injured Gunner Moncton and mortally wounded Gunner Marsh.

When I first compared the list of unit casualties in Jeremy White’s “The Devons” to the war diary and the Commonwealth War Grave Commission (CWGC) entries, I could see something was amiss, because Henry Marsh’s unit was described as “19 Field Regiment”. Not discounting some quirk of military administration and the possibility he had been posted I visited Freddie Friend in March 2014 and asked him about Harry Marsh. The air attack was seared in Freddie Friend’s memory, because Harry Marsh died in his arms.

I wrote to the CWGC with my evidence. CWGC confirmed there had been an error and Gunner Henry Marsh, 4126455 of 87th Anti-Tank Regiment, would be given a new headstone. When CWGC later published the original wartime grave registration forms the administration error, although unexplained, is clear to see (a copy of the CWGC held record, dated 9th September 1944, is pictured below). When disinterred from the Bou Arada road cemetery, someone changed 87th Anti-Tank on one of his burial records to 19 Field Regiment. Based on what information we will never know. When he was reburied at Medjez El Bab, he was buried under 19th Field Regiment.

Being an original member of 7th Devons, I can only assume Harry Marsh would’ve had the same pride in the regiment that Freddie Friend had. Freddie had fond memories of Harry. It’s good to know he’ll now have the right regiment on his headstone. 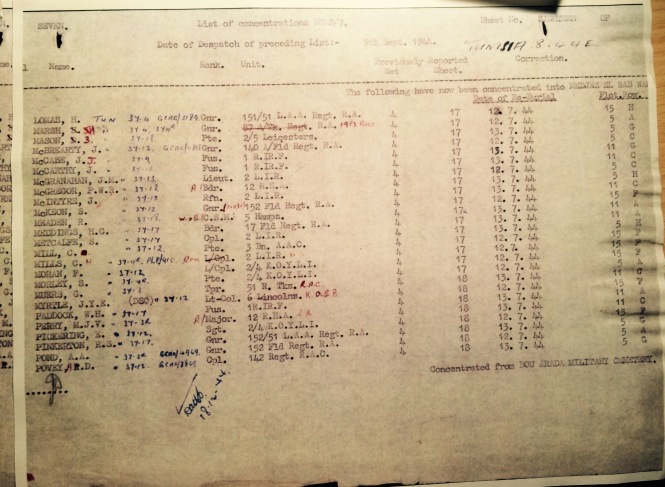